You guessed it… a concentration of cultural landmarks in geographically triangular area. In fact, there are no fewer than seven UNESCO world heritage sites concentrated here, with three main sites it would be shamefully remiss not to visit on your Sri Lanka Cultural Triangle tour: Anuradhapura, Sigiriya and Dambulla caves. And thanks to Yonder, you have the finest pick of Sri Lanka’s Cultural Triangle hotels.

Anuradhapura is the site of one of the ancient capitals of Sri Lanka, dating from around the 4th century BC. A mere 2,500 years ago! In fact, it is one of the oldest continuously inhabited cities in the world. It covers a vast area and, as you might expect given its venerable age, much of it is in ruins.

But these are ruins that will stir the Indiana Jones in your soul. They represent one of South Asia’s most evocative sights. The sprawling complex contains a vast range of archaeological and architectural wonders: enormous bell-shaped masses of masonry called dagobas, lofty brick towers, ancient pools and crumbling temples. Several of the sites are still used as holy places and temples. If you have the time, exploring on a bike is a fun and richly rewarding experience – a temple run that will put Lara Croft in the shade!

Sigiriya (sometimes referred to as Sigiriya Rock Fortress or the Lion Rock) is one of those special places that will always bring a smile to our face. Proudly referred to by locals as the Eighth Wonder of the World, this ancient palace and fortress complex has significant archaeological importance and attracts thousands of tourists every year. And we are more than happy to count ourselves among them. Time and time again.

Sigiriya is a huge, flat-topped rock that protrudes out of the flat landscape, soaring 200 metres above the surrounding jungle. This unassailable eyrie was the stronghold of one of Sri Lanka’s ancient kingdoms and remains a giant testament to the sophistication and beauty of their civilisation.

With, 1,202 steps, climbing Sigiriya is not exactly a stroll in the park (we told you to go easy on those breakfast pastries!) but, boy, is it worth all the effort once you are finally at the top. The spellbinding vista takes in the lily-pad-covered moats, water gardens and quiet shrines below, and the jungle beyond is mist-shrouded (assuming you’re there in the early morning when the climb is coolest).

On the way up, you’ll see the beautiful frescos painted into a cavern and a pair of colossal lion’s paws carved into the bedrock.

And a little-known museum exists in the shadows of Sigiriya which we think it is amongst the best in Sri Lanka.Unlike most other Sri Lankan museums, it is modern, brilliantly curated and immersive. Don’t overlook it!

The Dambulla Cave Temple – or Royal Rock Temple – is the southernmost part of the Cultural Triangle and richly rewards a visit. Built into a granite outcrop that rises 160 metres, the major attractions are spread over five caves, which contain statues and paintings related to Gautama Buddha and his life. There are 153 Buddha statues, three statues of Sri Lankan kings and four statues of gods and goddesses, including Vishnu and the Ganesha. A vast number of murals adorn the interiors.

Prehistoric Sri Lankans would have lived in these cave complexes before the arrival of Buddhism in Sri Lanka as there are burial sites with human skeletons about 2,700 years old in this area.

Once again, you’ll need to put in the leg work to get to the top of the hill. But Dambulla is 40 metres shorter than Sigiriya, so you should find it a doddle! Oh, and should you need some moral support as you make the climb, think of the monkeys sitting by the path as London Marathon spectators cheering you on your way.

All of the sites are remote and Yonder’s hand-picked hotels are in the middle of nowhere. Leaving the hotel to eat or drink isn’t an option. So, just live in the now and enjoy these superb hotels. Why would you want to be anywhere else, anyway?

The cultural sites are the main attractions. Here’s a bit more detail:

Anuradhapura is often referred to as the Pompeii of Sri Lanka. We see the similarity but it’s pretty vague to be honest. In essence, Anuradhapura is a combination of functioning religious sites, spectacular stupas (pagodas) and the fascinating ruins of an ancient kingdom. It is home to the still living Bodhi tree, the oldest human planted tree in the world and said to have been planted in 249BC. Be prepared to feel a little overwhelmed as well as overawed. Anuradhapura is so big you could easily spend days exploring it and avidly reading up on the various points of interest.

Sigiriya is a mind-blowing site. At ground level, you’ll see the outlines of former water gardens. On approach to the base of the rock, the lion steps form the entrance to the old fortress. These are the steps that feature in almost every travel brochure and they are even more impressive witnessed at first-hand. The way to the top of the lion rock is a mixture of stone staircases and narrow metal stairs. Half way up you’ll find the rock frescoes, featuring beautiful, bare-breasted maidens. Look out for the figures who have been given anatomical anomalies like an extra thumb (you’ll have to drag your eyes away from those mesmerising breasts however!).

After you’ve collapsed in a pool of sweat at the top and been reunited with your resting heart rate, you’ll be blown away by the view. And by the feat of engineering that created a sprawling palace on this lofty plateau – the foundations are still visible. Don’t miss the museum. It’s one of the best in Sri Lanka and often overlooked.

Dambulla caves are a highlight of any visit to the cultural triangle. The seven caves are all noticeably different in size and in the style of their frescos and statues. Each was created during a different period and as such as its own character. The complex had a verandah added in the mid 18th century which gives it a charming appearance. 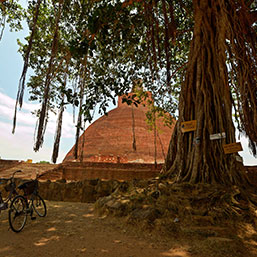 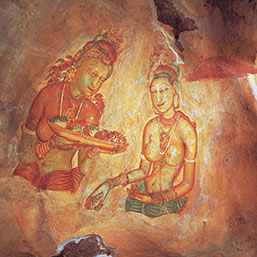 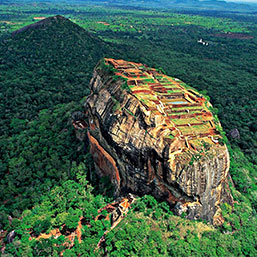 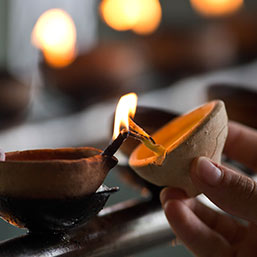 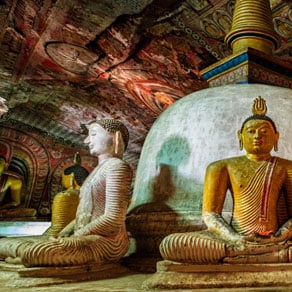 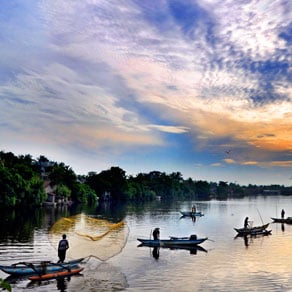 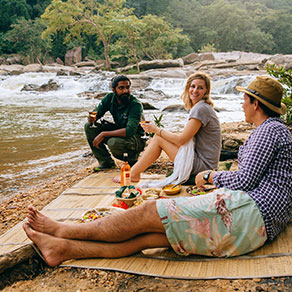 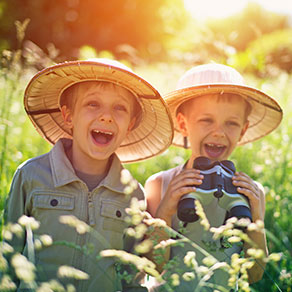 Spread across 37 acres, home to 138 species of birds, two species of primates and 2,000 trees, this hotel is modelled on an ancient royal palace. Liberal use of ebony wood in large bungalow style rooms looking onto verdant gardens.

In the heart of Cultural Triangle and up close with nature: ecologically constructed villas spread across 58 acres where you can encounter monkeys, peacocks and lumbering elephants. Think sustainable luxury in paradise, with space, privacy and huge glass walls.

We know our destinations inside-out. Each has been visited on many occasions. We’ve even lived in some of them in order to really get under their skin.

If you only do three things in Cultural Triangle…

Visit Anuradhapura, which has more ancient sites than you can shake a selfie stick at. We adore the pools of Kuttam Pokuna.

Power up (okay, trudge) the steps to the top of Sigiriya. The thud of your heartbeat and the sheen of sweat will quickly be banished when you discover what awaits you at the top

Dambulla Caves will give you the ultimate Buddha frescos cultural fix with over 2,100 square meters of them

Standing at the top of Sigiriya, surrounded by the ruins of a palace which symbolised one of the great ancient kingdoms and with the green Sri Lankan countryside beneath us, has to rank as the highlight of our visit.

Standing at the top of Sigiriya, surrounded by the ruins of a palace which symbolised one of the great ancient kingdoms and with the green Sri Lankan countryside beneath us, has to rank as the highlight of our visit.